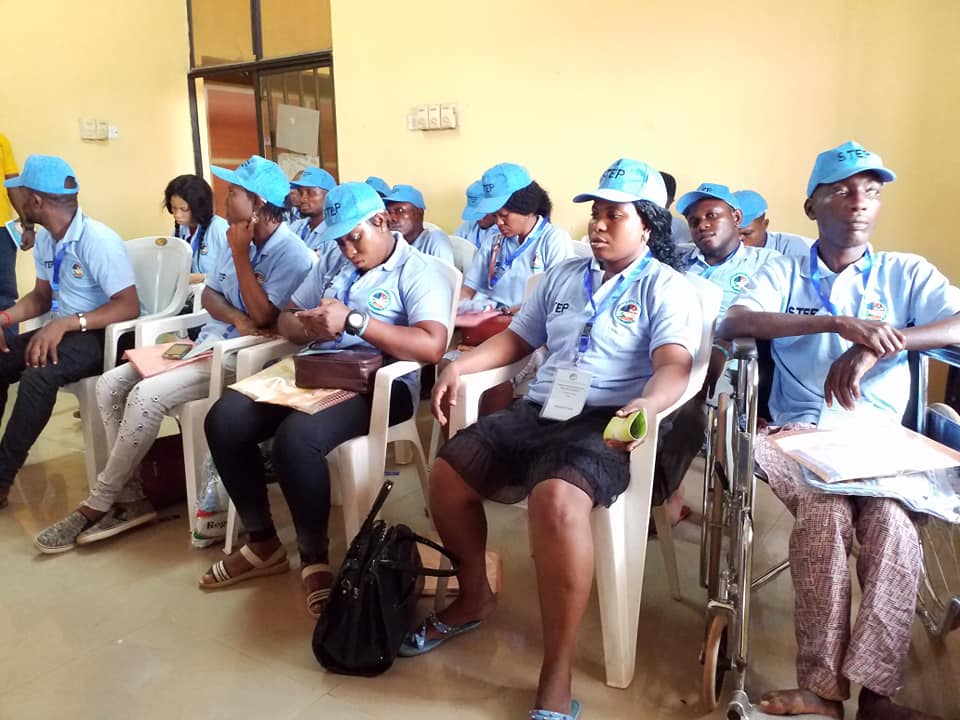 A one day Orientation Workshop has been held for Persons Living with Disabilities (PwDs) with a call on them to pay tribute to Governor Ifeanyi Okowa for providing a platform of opportunities for them.

The call was made by the Chief Job and Wealth Creation Officer, Prof. Eric Eboh during a one day Orientation for them in Asaba.

The orientation workshop which was organized in collaboration with the Ministry of Women Affairs and Social Development was attended by 25 PwDs drawn from all the local government areas in the state.

They included PwDs who are physically challenged and hearing impaired  and are to be trained under the state government’s Skills Training and Entrepreneurship Programme (STEP) in different vocational skills of their choice such as Fashion Design and Tailoring; Hairdressing and Makeover; Welding and Fabrication; Shoe Making; Catering and Confectionary; ICT among others.

Prof. Eric Eboh enjoined them to utilize this opportunity to learn well so that they could add value to their lives and Delta State in general, adding that their success is government’s success as well.

He pointed out that job creation office was created so that aspiring youths could be gainfully employed and economically stable, stressing that this was made possible because of the good nature of the governor who created such opportunities for PwDs to acquire and be established in relevant vocational skills of their choice in the past four years.

He asked them to be good ambassadors of the programme and to remain grateful to His Excellency, Dr. Ifeanyi Okowa, stressing that PwDs had often been neglected by pervious governments. He congratulated them for being among the selected few.

In the same vein, the Permanent secretary, Ministry of Women Affairs, Mrs. Oghenekevwe Agas, said all selected PwDs needed to stay relevant to themselves in becoming entrepreneurs and advised them not to abuse the opportunity given to them.

She admonished them to be productive and develop their skills saying that it was the favour of God that got them selected.

Speaking on behalf of other trainees, Miss Okotie Odemi Joy, from Ethiope East, expressed her joy for being selected as she had a passion for Fashion and Design. She commended the state government for creating the platform for youths to become entrepreneurs.

Also, Mrs. Roselyn Evieraisan, a trainer in Fashion and Design spoke on the challenges in training PwDs especially the hearing impaired, though they learn faster than the able bodied trainees.