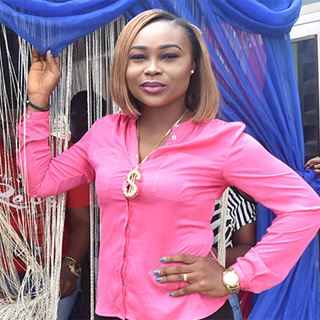 STEPreneur Cynthia Oma Ehire, the Chief Executive Officer of Oma Events & Oma Makeover, Sapele. She is one of the beneficiaries of the Delta State Government’s Skills Training and Entrepreneurship Programme (STEP),  in the 2015/2016 Cycle. Cynthia Oma stands out among her equals. Her ability to diversify into other affiliated enterprises other than Decoration and Event Management in less than one year of establishment makes her a goal-getter and a pacesetter.

Like so many uninformed youths, she thought the job creation scheme was business as usual like previous empowerment programmes. She thought it was an opportunity to enrol and afterwards sell the starter pack, but all that became history after the orientation course at Songhai Delta, Amukpe. “In fact, I entered into the programme with the mind set to take the money and leave the programme, but after the orientation course, my thinking changed”, she enthused. This actually underscores the importance and uniqueness of the one week orientation course. It afforded the trainees the opportunity to be exposed to courses in leadership, managerial abilities, life skills, mind-set change and personal effectiveness. In this regard, most testifiers affirmed that their successes were 90 percent based on the lessons acquired during the orientation course. It influenced their thinking positively.

According to her, her experience has been awesome. Her decision to stay focused on the programme after the orientation course together with the vocational training received from her trainer for three months and her starter pack equipped her to excel in the world of entrepreneurship. She said, “After the three months training, I was given starter pack to begin my business. Though it was called starter pack, I call it ‘life changer’ because immediately I collected the starter pack, my life changed.”

Cynthia Oma established her enterprise at 73, Akintola Street, Sapele after she received her starter pack. She said her success began when she was contracted by her first client to decorate and manage an event, who also requested that she (Oma) arranged for a cake designer and a makeover artist for her. Oma complied. After that encounter, she said to myself, “you can provide all these services. Why not acquire these skills instead of inviting others to provide the services?  So, I went ahead to learn how to bake cake, pastries and the artistry of makeover. As you can see, I am into cosmetics too. My clients who come for makeover usually seek my advice on the best body cream, cosmetics, facial cream/powder or treatment for their skin types. These questions motivated me to diversify into offering skin therapy services and the sale of cosmetics.” The combination of event management, catering, makeover and sale of cosmetics and beauty products boosted her financial base. For Oma, her enterprise is a one-stop-shop! To crown it all, within a period of one year and four months, she bought a car from the proceeds to facilitate her business. Highly impressed by her success, she exclaims, “I have never seen anything like this before. Job creation opened my eyes to these opportunities- Decoration & Event Management, before I diversified to Catering, Makeover and Skin Therapy.”

One could recall that in one of his addresses, the State Governor, Senator (Dr) Ifeanyi Okowa stated, “We are not training you to remain one. We are training you to become successful entrepreneurs who would train and employ other unemployed youths”. To give credence to this statement, Cynthia has trained and graduated 9 apprentices while 15 persons are undergoing training in her enterprise. She is fulfilled and happy with what she does to make people’s events worthwhile. When asked if she would apply to work as a civil servant when the opportunity comes, she retorted, “If I were a civil servant, would I have been able to achieve all these in less than two years? Certainly no. I am a fulfilled entrepreneur and the proud CEO of, “Oma’s Events” and “Oma Makeover”.

She called on other unemployed youths to seize the opportunity provided by the State Government through its job and wealth creation policy to engage in meaningful ventures to turn around their fortunes. “I advise Delta youths to collect the forms and to key into the programmes so that they can be trained on how to become self-employed and independent in order to contribute their quota to the development of the state”, she emphasized.