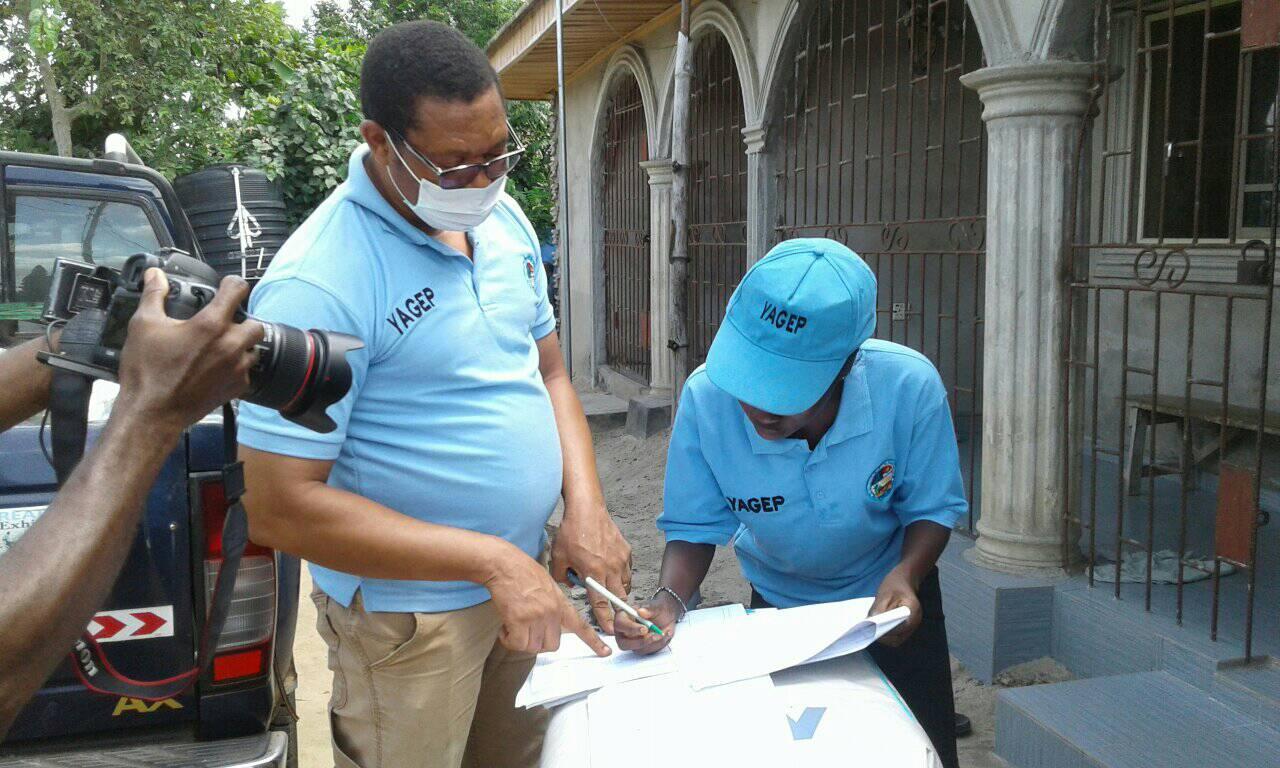 In continuation of its job creation programme, the Delta State Government has begun the distribution of farm input/support to beneficiaries of its Youth Agricultural Entrepreneurs Programme (YAGEP) in the 2019/2020 Cycle.

This set of beneficiaries of the farm input/support from the state government are the Brown YAGEPreneurs in Poultry and Fish Production.

It was borne out of the state government’s commitment to strengthening its job creation programme and in furtherance of Governor Ifeanyi Okowa’s leadership style of all-inclusiveness by ensuring that attention was also given to existing youth farmers in order to boost their production and to encourage more youths to go into agriculture. Not only that, the vision is to reach out to all Delta youth farmers through government’s agricultural interventions as much as the state funds can accommodate.

The major support packages include re-training, provision of livestock, animal feeds and medication for beneficiaries in Poultry, Piggery and Fish Production, while beneficiaries in Crop Production receive funding for land preparation, seedlings, fertilizer and other agrochemicals for pest and weed control. The support package is given with the view to strengthen their farm enterprises for increased food production and development of the agricultural value chain towards sustaining the growth of the state’s economy.

Speaking with newsmen at Kwale and Ozoro at the fish farms of two beneficiaries, the Assistant Coordinator YAGEP in the Office of the Chief Job Creation Officer, Mr Charles Chiejiene, explained that 65 Brown YAGEPreneurs in Fish Production would receive 1,000 post-fingerlings and 80 bags of high quality fish feeds of various sizes (2mm, 3mm, 4.5mm, 6mm and 9mm) to grow their fish to maturity.

Mr Chiejiene said cash was earlier transferred to each beneficiary to purchase post-fingerlings, stressing that he was in their farms to monitor their progress and to ensure that they complied with the instruction of stocking their farms before they would be provided with fish feeds.

In a bid to checkmate their performances, he emphasized that they would be given 10 bags each in the first tranche after which they would receive rest bags to grow the fish to table size.

One of the beneficiaries, Njuvwe Macqueen (Ndokwa West LGA) expressed confidence that the state government’s intervention through YAGEP was timely for her as a fish farmer as she would contribute a lot to bridging the short fall in fish supply as a result of the COVID-19 pandemic.

According to her, “Before now I was struggling. The support of 1,000 post-fingerlings and 80 bags of feed will help my fish business to grow faster. In spite of the lockdown, my job as a fish farmer is not locked down. While so many youths are lamenting of hunger and contemplating suicide, I am meaningfully engaged.” 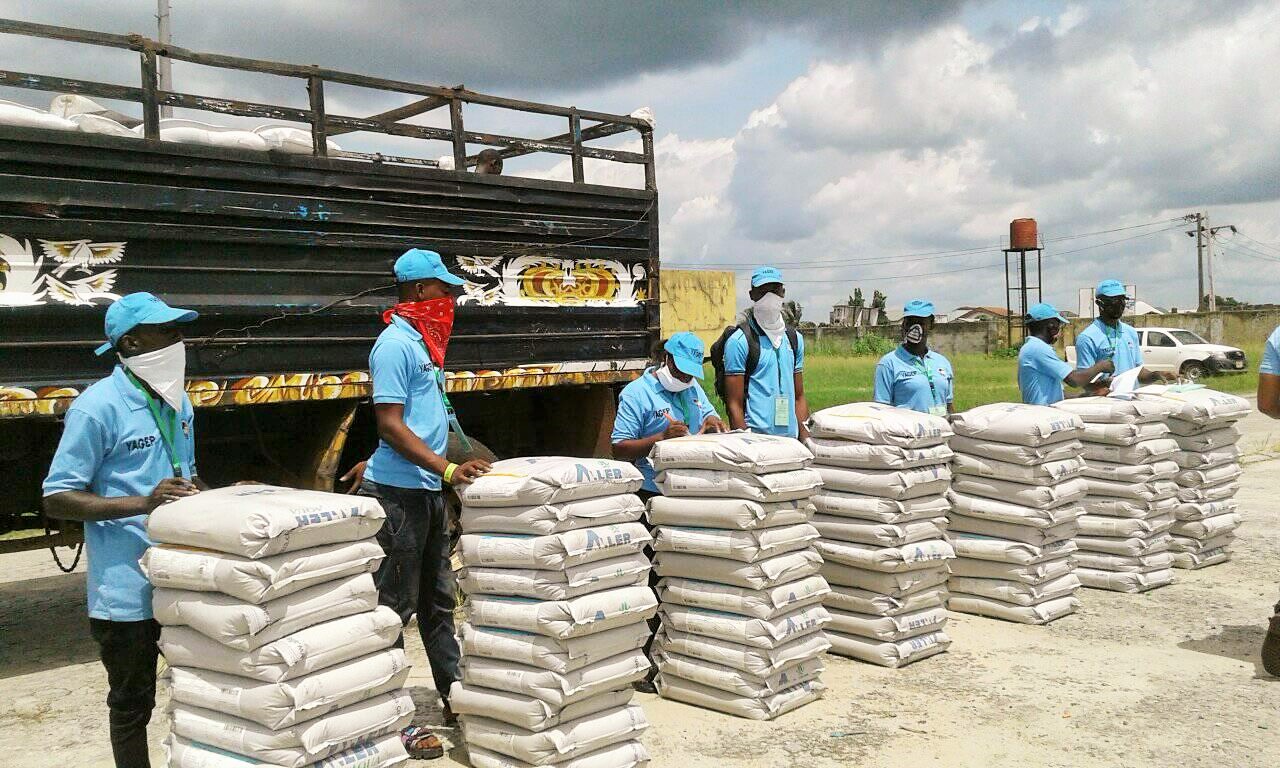 In Ozoro, Asaba Abraham (Isoko South) upon receiving the first tranche of 10 bags of feed expressed his gratitude to the state government for including existing youth farmers into its job creation programme.

“Though my farm is on a large scale, I have never benefitted from any government support programme for farmers. This is the first time and it will boost my production. I encourage the government to give more attention to existing farmers to solve the fish deficit in the state and to encourage more youths to go into agriculture,” he said.

Handing over poultry feeds to Brown YAGEPreneurs in Poultry in Ughelli and Warri, the YAGEP Programme Officer for Poultry in the Office of the Chief Job Creation Officer, Mr Edoja Okeh, pointed out that 66 poultry farmers were carefully selected to benefit in broilers or layers farming in the 2019/2020 Programme Cycle.

Mr Okeh said 34 of them received support of day old 300 broilers and 30 bags of starter mash and 90 bags of finisher mash to be given in tranches, stressing that he was there to deliver the first tranche of 30 bags of bird feeds to the beneficiaries in Ughelli and Warri.

He added that 32 of the beneficiaries under the layers category received 300 point of lay birds, 30 bags of grower feeds and 30 layer feeds which will be given in the next tranche.

He emphasized that each beneficiary in the broiler category would after sales of the stock at maturity make between ₦750,000 to ₦900,000, adding that the amount if reinvested into the business would transform the fortunes of the beneficiary for good.

Speaking differently in Ughelli and in Warri on behalf of other beneficiaries, Onobruchere Sylvester (Ughelli North LGA) and Okeme Christabel (Okpe LGA) applauded the state government for its investment in the agricultural sector. They expressed satisfaction in the transparent selection process that qualified them for the programme, appreciating the trainings they received in Asaba and the support package of 300 birds and feeds to bring them to table size. They said such support would help to eradicate importation of poultry products into Nigeria as Delta State will be self-sufficient in poultry supplies and will supply to other parts of the country.

An eyewitness in Ughelli, Mr Emmanuel Yarhere, who spoke to newsmen said he was amazed at the quantity and quality of support given to the beneficiaries. “I am a driver engaged by one of beneficiaries to convey his feeds. I waited in disbelief thinking it was a scam until the truck loaded with feeds arrived in Ughelli. Though I am not part of it, I can see it is reality. I heard the Governor has been doing this for five years now. This is real. Governor Okowa is the best!” he exclaimed.

No doubt, the job creation YAGEP in Delta State has triggered a new generation of agripreneurs in the state. These of course have multiplier effects on the state economy. By this absolute determination of the state government to sustain the programme, it could be said this effort will drive economic diversification through job and wealth creation, provide food security and sustain the state economy especially at this trying time of global oil fall as a result of the Coronavirus pandemic.