In furtherance of the Delta State Government’s commitment to building a new generation of entrepreneurs in the state, the Green YAGEP beneficiaries of the 2019/2020 Cycle have received day old broilers to begin their agricultural enterprises in Poultry.

The beneficiaries who were 14  having completed training in Poultry Business and Management under the Youth Agricultural Entrepreneurs Programme (YAGEP) for three months were today given birds to begin their enterprises in Poultry.

Prof Eboh said the state government ordered for 7,000 birds from the AgricTed Hatchery in Ibadan and that each beneficiary received 500 day old broilers in addition to other support packages given to them earlier in preparation to kick start their businesses in Poultry.

He listed the establishment package for each beneficiary to include a 500 capacity poultry pen at maturity; 500 day old broilers; 145 bags of feeds given in tranches to avoid expiration; 20 adult drinkers, 20 adult feeders, 10 baby feeders and 10 baby drinkers; a roll of 15kg black nylon for brooding; provision of vaccines at different doses; 4 stoves and trainings.

He said the delivery and distribution were carried out in the night/early hours of the morning to protect them from the harsh intensity of the sun in order to keep them stable and to avoid mortality.

The Chief Job and Wealth Creation Officer represented by the Coordinator of YAGEP, Mr Samuel Ndikanwu, reiterated the state government’s resolve to make sure the programme succeeds, saying all machinery has been set in motion to ensure that all vaccines are administered to the birds at the right time under close supervision of their trainers.

Speaking on the establishment of beneficiaries in their personal lands in contrast to the YAGEP Cluster Farm method adopted in previous cycles, he explained, “The job creation office through its review of the previous cycles considered the challenge faced by beneficiaries whose places of residence are far from the YAGEP Cluster Farms. To solve this challenge and to sustain the programme, we now establish beneficiaries right in their premises and communities to ensure that the poultry farms are managed effectively and to achieve the desired result envisioned by the state government.” 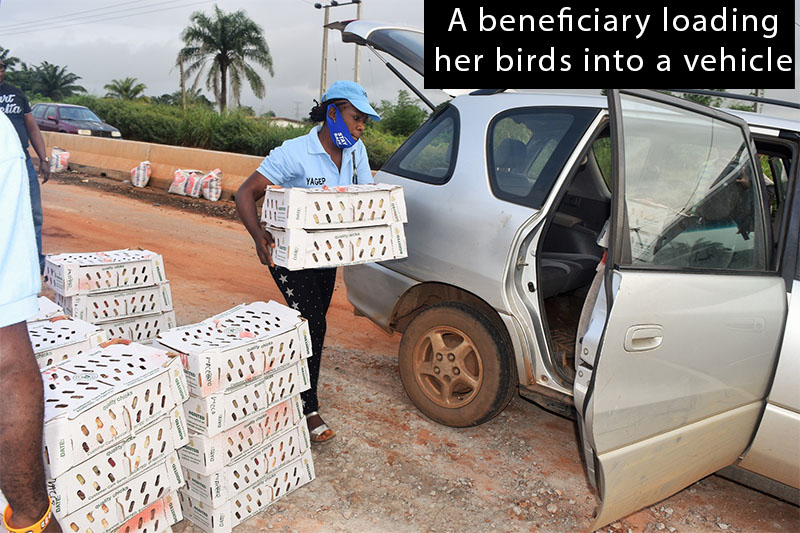 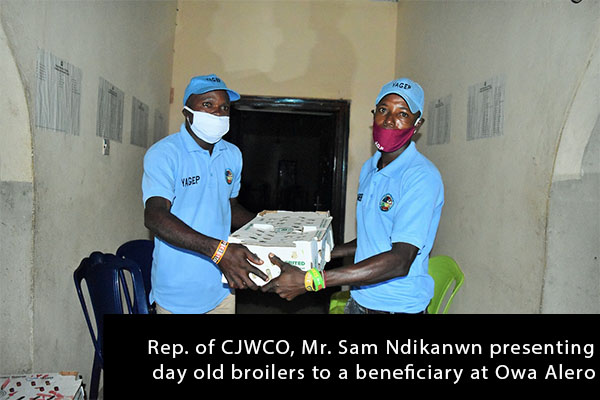 Speaking at Owa-Alero, the first venue of the distribution, Uzoma  Ebenezar said he was satisfied with quality of training given in terms of brooding, administration of vaccine, hygiene in poultry and establishment with a poultry pen which is 21 by 31 feet in size, drinkers, feeders, feeds to train the birds to table size amongst other support inputs.

Continuing, he cost the support package provided by the government to each YAGEPreneur in Poultry to be above 2m, pledging to make good use of the opportunity to provide jobs for other unemployed youths in his community.

At DARDA in Ibusa, Precious Obaje said that the establishment package came to her as a surprise as she was not expecting that much, emphasizing that the state government gave them all, from training to marketing of products, which they need to succeed.

Also speaking from Sapele in a telephone interview, Okimute Beauty expressed her gratitude to the state government for the opportunity given to her to train as an entrepreneur with a pledge to work hard to sustain her business and to uphold the vision of the Governor of building a new generation of entrepreneurs.