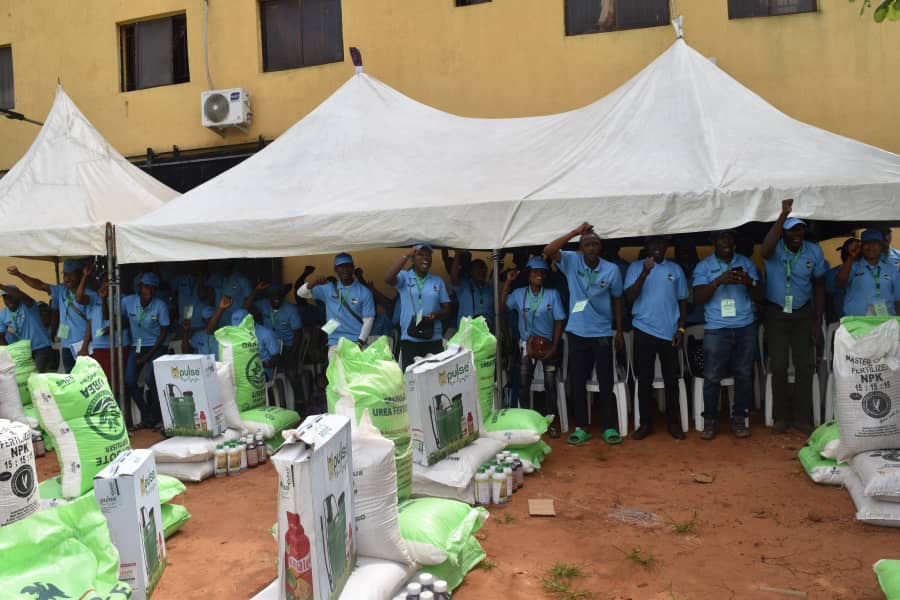 As part of its commitment to boost food production in the state, Delta State Government has flag-off the handing out of farm input support package to beneficiaries of the 2022 Youth Agricultural and Entrepreneurs Programme (Brown YAGEP) in cassava cultivation.

The flag-off exercise witnessed by the Chief of Staff to the Governor, Rt. Hon Festus Ogas, the Hon Commissioner of Agriculture and Natural Resources, Dr. Godfrey Enitan and the Hon Commissioner for Youth Egwunyenga, was attended by selected already existing youth farmers otherwise known as Brown YAGEP beneficiaries within Delta North Senatorial District.

While congratulating the beneficiaries, Hon. Agas stated, “The primary aim of every government is to make life more meaningful for its people. Delta is a developing economy. In 2015, Governor Okowa made a covenant with youths and women to create job. This was a promise made and a promise kept.”

He pointed out that the state government has trained and established 12,800 entrepreneurs through its various job creation programmes.

He charged them to make judicious use of the farm inputs and to be good ambassadors of Governor Okowa’s drive to make life more meaningful for them.

On his part, the Agriculture Commissioner, Dr. Enitan, reiterated the Governor’s passion to boost agriculture and food security in the state

He urged them to use the farm inputs support package to improve their livelihoods, especially in the agricultural value chain.

Also, Comrade Ifeanyi Egwunyenga, the Hon Commissioner for Youth, tasked them to have the right mind-set in order to use the support package to produce results that would enhance their lives and those of their families.

“This is a seed. The determinant of your productivity is your mind. It is how you see this support will determine if it will yield fruit or not. Seed is for sowing; it is not for eating. From the produce of your seed, you will eat during harvest,” he remarked.

Earlier, the Chief Job and Wealth Creation Officer and Head of the Delta State Job and Head Creation Bureau, Prof Eric Eboh, said that a total number of 1,520 YAGEP beneficiaries were trained, established and supported in various agricultural enterprises including poultry, crop production, piggery, fish production, agro-processing and agribusiness, from 2015 to 2021.

He pointed out that the 2022 YAGEP cycle which is the 7th cycle commenced with Orientation and Farm Enterprise Training (OFET)) last week with a target to cover a total of 300 Brown YAGEPreneurs in crop production and poultry production with 142 of them already enrolled in cassava cultivation.

“This handing-out of cassava enterprise inputs at Asaba is the first distribution centre, which will be followed during this week and next week by distribution at various centres including Agbor, Oghara, Eku, Ughelli, Oleh and Amukpe. The distribution will cover a total of 142 Brown YAGEP beneficiaries in cassava cultivation.”

He explained that the YAGEP beneficiaries would be trained on best agricultural practices in efficient, profitable and innovative cassava enterprise management with the overall aim to help them become better agricultural entrepreneurs in the next months of the cassava farming cycle.

Responding, Peter Williams and Gloria Nwanokwai expressed their gratitude to the state government for the initiative, pledging to use the farm input support package to expand their farm enterprises and to boost food security in the state.

1. The Chief of Staff to the Gov., Rt Hon Festus Agas (2nd right) handing over farm inputs to a beneficiary, while the Hon Commissioner for Agriculture, Dr Godfrey Enitan and his Youth Counterpart, Comrade Ifeanyi Egwunyenga and the CJWCO, Prof Eric Eboh look on.

2.A cross section of beneficiaries