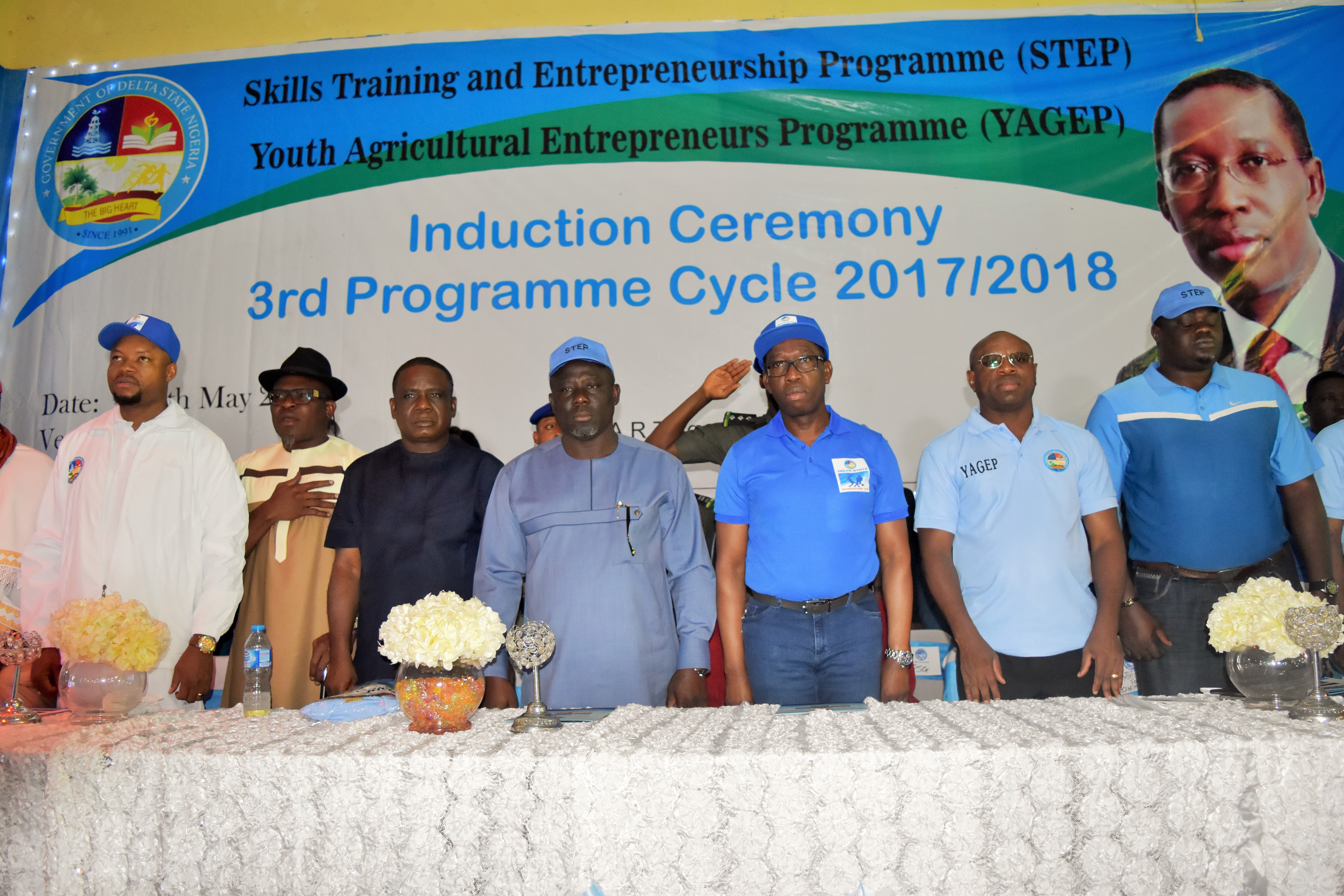 Governor Ifeanyi Okowa has disclosed that the Delta State Government is collaborating with the State House of Assembly to institutionalize the Job and Wealth Creation Scheme.

Governor Okowa made the disclosure at the Induction Ceremony for the 2017/2018 beneficiaries of the state government’s job creation programme, the Skills Training and Entrepreneurship Programme (STEP) and the Youth Agricultural Entrepreneurs Programme (YAGEP) in Asaba.

The inductees numbering 745 beneficiaries included 209 Brown STEP, 347 Green STEP, 159 YAGEP and 30 Persons with Disabilities (PwDs) in the third cycle of the programme.

He said ‘’plans are on to present a bill before the State House of Assembly for the establishment of a Job and Wealth Creation Empowerment Law. “I hope that the programme continues in government even when I have left office. If we continue with it as a state, after 10 years the multiplier effect will be felt”, he enthused.

He advised them to network among themselves with the view of building a network of young entrepreneurs to drive the economy of the state.

He called on the private sector and financial institutions to partner with the state government and the beneficiaries for the growth of the enterprises, stressing “We have done three cycles and we should be able to partner with the private sector and financial institutions. The partnership with World Bank through SEEFOR with the state government came to be because of trust. I am grateful to the beneficiaries of the first and second cycles for making us proud. I hope that the third will do better”

While disclosing that the state government would soon embark on the 4th Programme Cycle of the STEP/YAGEP Programmes, he charged them to be disciplined; honest; innovative; resourceful and hardworking; committed and determined in order to succeed in their various enterprises.

He also enjoined them to be role models for youths in their communities and to remain good ambassadors of the programme by training other youths to become self-reliant and employers of labour.

According to him, “As a government, I urge you to stay in the realisation that you stand out among youths as many will look up to you, you are a role model to other youths in the society, you have to put in a lot of commitment through hard work and honesty, stay patriotic to yourself and Delta State and you will succeed. Challenges will come but if you stay committed, you will be successful”.

“I congratulate you on the successful completion of your training programme, you are privileged to be ambassadors of this programme, once you step out, the world looks out for what you will become, and do with yourself; you should be an embodiment of the programme in character and deed.”, he added.

As a father, he prayed for their success and officially inducted them into the programme in this words, “I am a role model of youths in the state. I will try to make a positive impact on Delta State. God help me.”

On his part, the Chairman, Job Creation Steering Committee and the Hon. Commissioner for Economic Planning, Dr Kingsley Emu, represented by the Hon Commissioner for Youths Development, Hon. Karo Illolo, said the job creation scheme is hinged on sustainability and development through monitoring and mentoring.

Earlier in his address of welcome, The Chief Job Creation Officer, Prof. Eric Eboh, explained that the third programme cycle of 2017/2018 has 745 beneficiaries including 30 PwDs, pointing out that their training and starter packs were funded by the World Bank/European Union assisted State Employment and Expenditure for Results (SEEFOR) projects.

Prof Eboh recalled that among the 30 PwDs were 5 sisters from Ibusa who were enrolled into the programme at the instance of Governor Okowa when he encountered them at the Town Hall Meeting at Akwukwu-Igbo last year.

The ceremony featured cultural dance and choir presentations by the beneficiaries.

Among the dignitaries present at the ceremony were the Speaker of the State House of Assembly, Rt. Hon Sheriff Oborevwori and other top government functionaries.